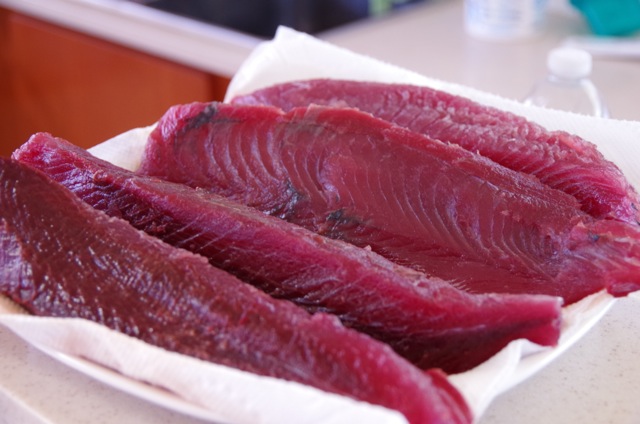 The first 3 days went by in a haze, I was seasick and tried to move as little as possible, only got up when I was on watch or needed to go to the bathroom. No food for me. The weather was really tough, the wind came right into our faces, with around 25 knots and we had to take a lot of beating, while moving rather slow due to heavy waves and wind. Luckily, Kevin and Marco were fine and could take care of all the problems that Felix was presenting us (basically the bad fuel the consequences).
Meanwhile Marco tried to pursue his long wanted goal to fish a tuna, to eat fresh sashimi right on the spot (we bought wasabi and soy sauce in advance). He threw out some fishing lines, all with differently colored bait, to increase our chances. The first day no tuna was in sight, instead we caught a king mackerel. We decided to keep it and Marco cut off some nice filets. Just afterwards we realized that with this heavy motion no one is too fond of cooking, so off it went to the freezer. Kevin’s wife had prepared some very nice dishes that we could just thaw and eat, so at least the boys stayed well nourished. The following days went by without fishing, because the weather was just too wild (I was constantly fearing someone would be thrown overboard). Confused seas!
Sitting up in the helm (pretty high above the boats “ground level”), being moved around with this funny catamaran motion I couldn’t help it, but imagine we would be riding an elephant. Climbing up and down the waves, its taking us step by step closer to our destination. Good boy ;-)!

After only one day the starboard engine starved again for the first time. Searching for quite a while Kevin and Marco found a huge bugger inside of the housing of the primary filter. Of course troubles like that always have to come up in the middle of the night (quite likely, since night time starts at 5 pm and lasts until 6.30 am). Sick as I was I was very helpless, but could at least try to look at the radar, while Kevin and Marco had a very tough time, getting into the engine room in these stormy times, being tossed around, washed with saltwater all over and making the engine work again. My heroes!

Although these days were very choppy, we found nice moments to relax. A lot of harmony within the crew. 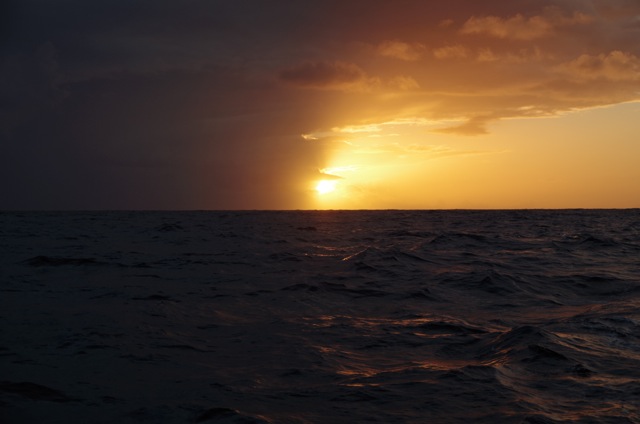 After getting sick of being sick, I realized that I have to accept “medical help” and took a different pill against seasickness, which finally worked. Magically I got better, started to eat and could slowly start to enjoy the boat and the view. Yay!
The view means you see nothing but an endless blue ocean, beautiful and scary at the same time, absolutely fascinating.
A day later the engine died again (… during night time and heavy waves, of course) and the procedure repeted itself, Kevin and Marco climbing into to hole, searching for the obstruction in the fuel system. To make the scenery complete, a flying fish came flying on the boat, hit a life vest hanging right in front of Marco (who was concentrated on fixing something) to then drop in front of his feet, flap around and almost scare him to death. I never knew, they are suh decent flyers! They make 200m over the surface and drop back in, pretty impressing… and obviously have no shame of visiting sailors. Nice as we are, we gave it back to the ocean 😉

Great relief, as after several hours Kevin and Marco had finally found the next bugger and the engine was running again. Unfortunately only 20 minutes later it gave up once again again, so they decided to take the next look during daylight, hoping for lighter winds and less waves, to make work “easier”.

The following days the seas calmed down and we could even use the genoa (the front sail) to get some speed and save some fuel using only one engine.
Days passed by with shifts of 3 hours, looking out for ships, to avoid possible collisions (you mostly don’t see a single ship, and if so, it likely does not cross your route at the same time you do, but still very essential), and 6 hours off-time.
Yesterday (day 4) finllay the winds calmed down on backed to portside, so we could make up to 7 knots with one engine and the genoa.
Marco and I watched the sunset and saw this tiny rainbow dropping out of the clouds like rain on the other side. 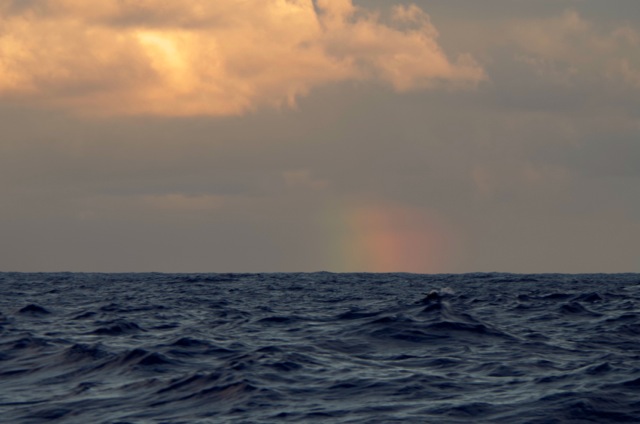 After coming back into the salon, we saw the first ship in 4 days! How even such a small thing can be exciting (at least for me, guess the boys were rather unimpressed). 220 m long and twice as fast, it made its way across our route and disappaered as quickly as it had popped up.

After a nice and calm night without much bumping, Marco laid out some fishing lines to further go for his goal of catching a tuna. We had different types of plastic bait fish and topped them off with some pieces of the makerel, that we had fished the day we left the bahamas.
5 minutes later I hear “Gesita, come see this”… what is it ? “I think i have already caught a fish!” No way, I thought, after 5 minutes, not even having fully laid out the line.
But he was right. Must be a huge one we thought, getting in the line. The fishing rod was bending over with the weight and minutes passed trying to pull in that fish, fearing the line would rip apart and we would lose bait and fish. As we got him in, we were both 85% sure, that it looks like a tuna… since the hook had destroyed his eye and he was injured there was no thinking of giving it back to the ocean anyway, so Marco started with the dirty part. 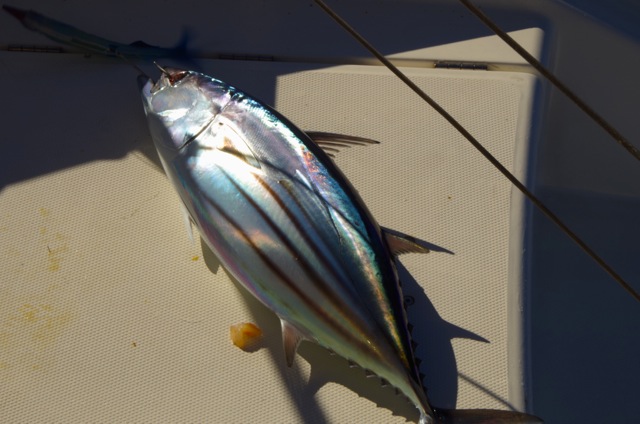 It is a TUNA!! Realization came when we saw the meat and Marco took a first bite (straight out of the head after cutting it off, no joke!).
Being the happiest man on earth, Marco started to filet his catch.
Weirdly enough inside the fishes belly (next to the guts, just loose) was a tiny tiny fish. 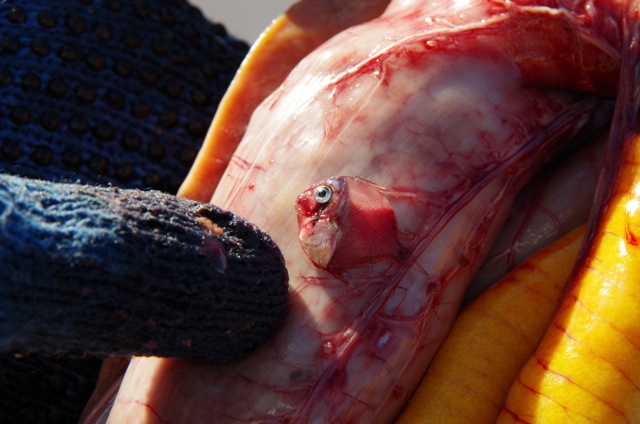 Sorry, in case the picture is disturbung to anyone reading this. 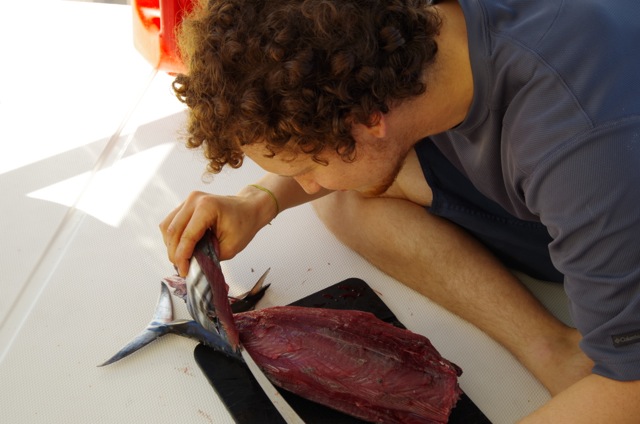 After a lot of work, we now had four huge and beautiful filets of the freshest tuna that you can imagine! Some cooking needed to be done!

Means were small, but we managed to make a really nice meal out of this 🙂 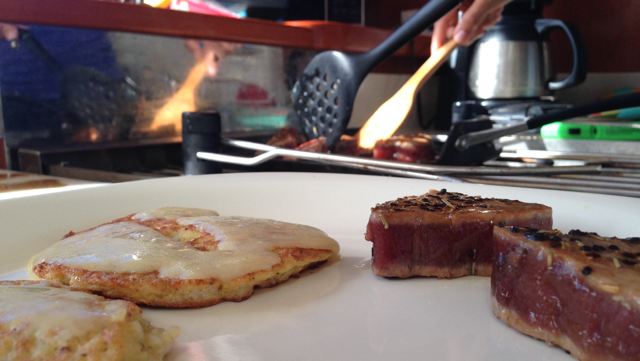 After about 500 nautical miles travel from the bahamas we made a right turn today (day 5), and are heading straight down south, to the USVI. The wind calmed down further and almost died completely. It seems that after these stressful times of too much wind, we now have the opposite problem of no wind (true wind 0.6 knots…), meaning no sailing. Luckily we saved some fuel the last days only using only one engine and the genoa. Now we are running on the starboard engine only, after Kevin improvised a litlle prefilter at the point of fuel input, to have an attack point to get the buggers out before they actually enter the system. Works well so far! Knock on wood.
The water was so calm and smooth, it almost looked like and icy lake in the alps. 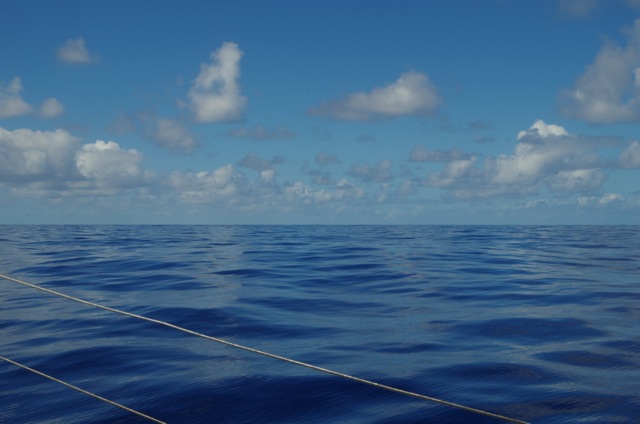 We had a spectacular evening, sitting on the roof under the sail, watching the rising, bright yellow fullmoon slowly eating up the starry sky, illuminating the ocean in front of us. How much better can this life get !?
No pictures of this, sometimes you just gotta savor the moment and look through your own eyes instead the lense of your camera 😉

After Kevins wonderful invention of “Bray’s Bugger Blocker”, the starboard engine was purring like Felix the cat and we had the first quiet night in the portside cabin! 🙂 no waves, no engine, what a heavenly place. The new morning started with the 3 to 6 am shift for me, being rewarded with a beautiful sunrise, while looking through old pictures contemplating how amazing my family and friends are (missing you guys).
Then Kevin and me started a little Cribagge match (funny card game). Unfortunately he seems to have trained all his life and wins all the time :-D…
Another tuna lunch (yeah, baby) later we still have calm seas, no good sailing wind, but after another little engine intermezzo we’re getting closer and closer to our destination. We should be there tomorrow around lunch time, then you’ll be finally receiving this email!! 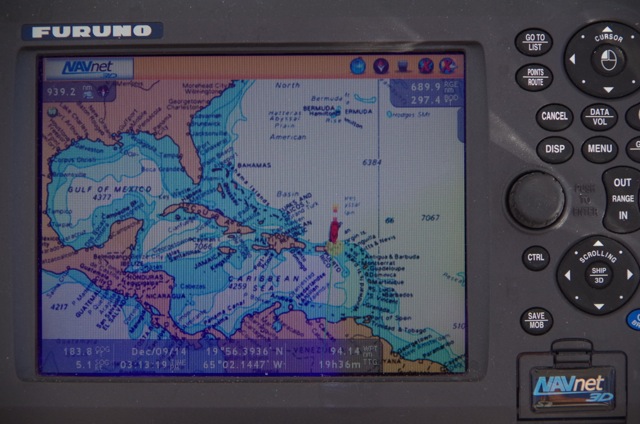 You can see our turning point at the top of the red dotted line. 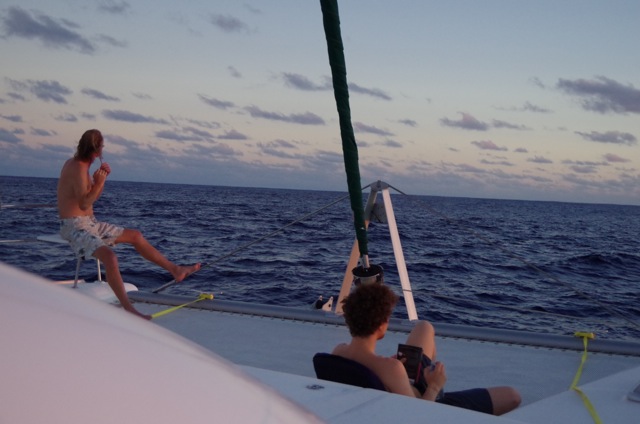 We are enjoying the last moments on Felix out in the ocean now.
Lets see what other adventures are facing me on this wonderful voyage. I’ll keep you informed!

We arrived well a few hours ago, checked in with customs and immigration and are starting a big boat cleaning marathon now.