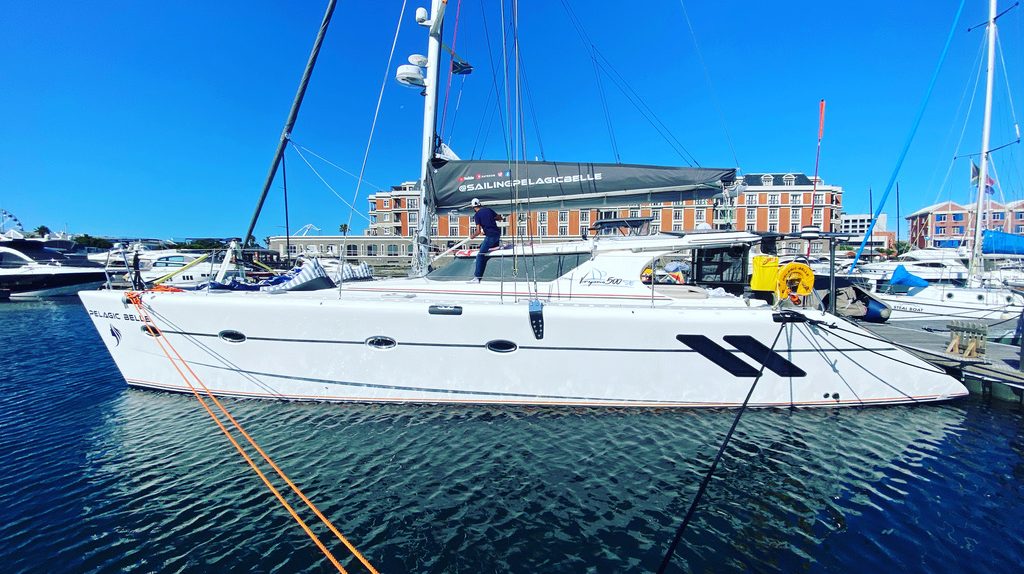 Pelagic Belle is a 2013 Knysna 500 owners cabin version with three cabins and three heads. She was built in Knysna, South Africa and sailed to the Seychelles where she remained until 2021.

The Knysna Yacht Company only produces three yachts a year, each on order and customized to their buyers specific tastes.  From her sleek but powerful lines, to the intelligence of her design, her hulls shaped to effortlessly conquer oceans and take you safely, and in utmost comfort to the furthest reaches of the world, the Knysna 500 has, in spite of her deliberately kept small production numbers, also conquered the world of cruising with its enviable reputation. The name Knysna is known and awe-inspiring to those who have looked beyond the production lines for a boat that is not built to a price point, and where only the very best will do, from the drawing board to the final touches.

Pelagic Belle was built by former owner and founder of the Knysna Yacht company.  She was meticulously looked after and sailed a few times a year. She returned to, Durban South Africa in April of 2021 and sailed to Knynsa where she spent four months having solar and lithium batteries fitted for blue water cruising.

In August of 2021 owners sailed her to Cape Town where she spent another five months for an extensive refit and upgrade. Standing and running rigging were changed and new North sails (NorLAM) fitted. New Flexiteak floors fitted in the cockpit and sugar scoops.

In February of 2022 the owners sailed from Cape Town to Grenada.  She was hauled on arrival and had her bottom paint done and both engines and sail drives serviced. Currently owners are making their way North to the Bahamas aiming to arrive there in February 2023.

Pelagic Belle is ready for serious blue water sailing with a new main, genoa and code zero, as well as an asymmetric spinnaker. She is fast and incredibly comfortable with excellent upwind performance.  She is extremely strong and purposely built for unlimited ocean cruising in all latitudes and weather conditions.